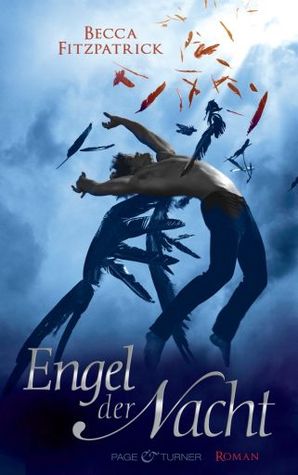 Romance was not part of Nora Grey's plan. She's never been particularly attracted to the boys at her school, no matter how hard her best friend, Vee, pushes them at her. Not until Patch comes along. With his easy smile and eyes that seem to see inside her, Patch draws Nora to him against her better judgment.
But after a series of terrifying encounters, Nora's not sure whom to trust. Patch seems to be everywhere she is and seems to know more about her than her closest friends. She can't decide whether she should fall into his arms or run and hide. And when she tries to seek some answers, she finds herself near a truth that is way more unsettling than anything Patch makes her feel.
For she is right in the middle of an ancient battle between the immortal and those that have fallen - and, when it comes to choosing sides, the wrong choice will cost Nora her life.

Initially, I didn't want to read this series. It was one of the first I heard from when I started blogging, pretty big hype and all. After The Immortals series was such a huge fail for me, I shied away from this even more. It was even released by the same German publisher. So why, then? Coz I didn't have to buy it to read it -- I borrowed it. 😉
At the end, I was positively surprised. It didn't leave me overwhelmed, but it was certainly not equal to torture that was The Immortals. Although, the first book Evermore, wasn't all that bad, either... Anyway, Hush Hush was a good read overall.

Nora was too neurotic for my tastes, and Patch all but defined the cliche of Tall, Dark, Handsome, but they did make an rahter interesting pair. Which is interesting in itself, because I'm so 0% clueless as to what Patch sees in Nora. He's an angel, which means he has girls lining up to be his, flallen or not, but Nora? She's perfectly ordinary -- which isn't necessarily a bad thing! --, and it's just never said why exactly Patch is so taken to her personality. Okay, so he loved a mortal before, and Nora's a very nice and cute girl, and somehow she connects to Patch's arch foe -- but all of that should not interest him, or even put him off more. Which is why I do not understand his hesitation, leave alone his affection. Totally beats me.

Anyway, as I arranged myself with Nora somehow, her best friend Vee soured my mood throughout the book. I have no idea why these two even spend time together, since they certainly don't share the same interests, leave alone have the same way of thinking. I would've gone crazy already trying to name her my best friend, and I very much doubt that she is to evolve into something more agreeable over the other three books.

The story was pretty chaotic, which got a bit better towards the end, but it still wasn't nice to read through. It was chaotic without being suspenseful, not really well thought through. Cliche Patch got a bit better as the story progressed, but Nora.. She might have been a protagonist, but she certainly wasn't a heroine, no matter her willingness to sacrifice herself for another. If you look at the concept, Fitzpatrick has thought up a very nice story, it's just the delivery that leaves alot to be desired. The arc of suspense just was not drawn, but let off for "normal" sections in between too often, and it took a while to build it back up, just to be let doen gracelessly again.

All in all, I still want to give the sequel a shot. I'd like to know more about Patch's new job as a Guardian Angel, also more about his past, and how his relationship with Nora will develop. I hope for more imagination than a love triangle and misplaced jealousy, and maybe some more butterflies, too.