Thanks for stepping by the Book Tour of Alpha Squad: Friends & Foes!! 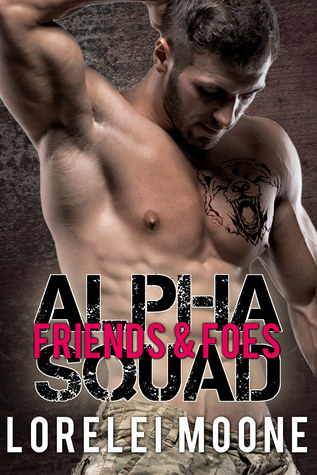 Alpha Squad has received its very first assignment and recruit Adam King is excited to jump head-first into the action. When the team arrive in the shifter refugee camp in Sevenoaks to investigate some attacks on the local population, the evidence seems clear: the attacker they are looking for is a shifter. And one in particular keeps popping up in suspicious circumstances; Felicity Weir, who works in the camp. There’s just one catch: Adam’s inner bear insists that Felicity is his mate. Now, he's torn. How can he help make Alpha Squad's first mission a success, when he can't endanger the woman who appears to be their prime suspect?
Bear shifter Felicity Weir has been looking after the shifter refugees camping near Sevenoaks ever since they started streaming in from Europe some months ago. She is determined to serve, to help these displaced people build a new home and future for themselves. Then the attacks began and the mood in Sevenoaks grew more and more hostile toward these newcomers, and by proxy, against her. First it was livestock that turned up dead in the local villages, soon after, human victims started to turn up. All the evidence points toward the refugees, but Felicity cannot accept that one of her kind would be capable of such violence. She has no choice but to take matters into her hands and investigate the deaths herself.
With Alpha Squad and the local police hot on their heels, Felicity and Adam must join forces. Will they be able to prove her innocence before public opinion is irreparably poisoned against the shifters, and their chances for a happy future together are destroyed?

Why I picked this story up:

A two against the world romance sounds good to me. =)

I can summarize this story in a single word: cute. The characters were likable, but not extraordinary, definitively on the sweet side. The plotline was solid, relatively suspenseful, yet a tad too obvious and unfortunately not even close to what I expected it to be from the sooooo suspense-promising blurb. The writing wasn't gripping but I don't think every story needs to be. It wasn't particularly deep, so it fits. Not for me, but I highly recommend it for people who enjoy light reading with a bit of suspense and a lot of cuteness. The sex was merely a blib on the page, so not recommended for heat seekers.

Thank you for approval of an ARC goes to:
IndieSage PR

Lorelei Moone is an up-and-coming author of paranormal romance based in London. A lover of all things sweet, and caffeinated, when she’s not writing about sexy bear shifters and their strong-willed curvaceous love interests, Lorelei can be found baking cookies or cakes for her family.

This is a tour-wide giveaway.