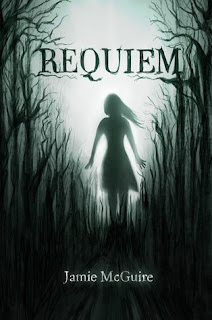 Blurb: Things are not perfect. Nina's wound healed and she's about to go back to Brown for the new semester, but everything's a mess. Ryan left to enlist, only sending her a letter, and her friends blame her for it, of course, just as much as she blames herself.
With Ryan gone, Claire is gone too, so Bex tries to fill in a bit, especially when Jared has to leave Nina because she's constantly having horrible nightmares about her father's death, and she only can sleep through the night with her love gone. At first, Nina thought they were just dreams, although quite horrible ones, but then she discovers that Archangel Gabe, Jared's father, tries to tell her something: to get back Shax's demon book at all costs. But what could be in there that could be a key to saving Nina's life?

It starts with one of the dreams. Nina witnesses how Gabe and Jack steal the Demonic Bible from Shax, ending with Jack being torn apart by demons. While Jared fears demons are invading Nina's dreams, she shruggs it off since she has a lot of stress at the moment. Said stress comes mainly from her working as an intern in her own company, learning the ropes so she can take over her father's business soon. Her second in command, Grant, is kinda hitting on her, while her fellow intern Sasha is hitting on Jared, thus ticking Nina off heavily. It doesn't make it better that her friends, besides Beth and Kim, are shunning her because they hold Nina responsible for Ryan leaving for the army. So right now, Nina's life sucks big time.

But that's not the worst yet. Although Nina tries to play it down, Jared feels what she feels, so he decides to leave her to Bex and hunt for a few answers. Turns out she can sleep like a rock without him around, and that it's not demons invading Nina's sleep, but Gabe trying to send a message. He wants them to get back Shax's bible because it contains knowledge to save Nina's life, but no matter how persistend Jared is, no one seems to have any answers. Over the months, the nightmares stick around and Nina neglects all her friends over it. When they finally find out that the dreams stay away if Jared stays away, it's a whole other nightmare on the emotional level, but other than that things return to normal, only that Nina is watched by Bex every night instead of sleeping next to her love.

But still things aren't quite back to where they belong, because Nina is still shunned by all her friends because of Ryan. To top it all off, he manages to get himself shot, so Jared and Nina are off to Germany to meet up with Claire. While waiting anxiously for him to get out of the surgery, Kim shows up, and Nina has to try and deal with the fact that her normal and her mystical life aren't that neatly separated after all. Turns out that Kim belongs the clan that first stole, and since than guarded Shax's bible, and she is determined to return it to its safest location: under the Sepulchre, a tomb in Jerusalem, a place so holy that not even the most powerful of Hell can reach it.

However, the book is important because Nina is the woman in a prophecy, the one to give birth to a very special angel. That's because Nina isn't a normal human, she is of Merovingian blood, like Jack, meaning she is a descendent of Jesus Christ. Her powerful blood combined with Jared's angelic heritage is something Hell fears. But one step closer to the truth doesn't bring them closer to the book just yet, although Nina is now able to really interact with her 'nightmares'. Sadly, this brings Shax on her tail, and they barely escape an explosion in the loft. To make things worse, Eli tells them that Heaven will not interfere unless The Balance is acutally disturbed, which means they stand on their own. Again left only with the mere lead to get Shax's bible back to search its contents, they grudingly move back in with Cynthia.

Although everything seems to be going to south, with Jared adding a notch to it by not permitting any intimacy for the mean time, at least Nina and Kim are still buddies, and Claire and Ryan eventually come back into the US, meaning they're reinforcements. Plus, since Ryan remembers vaguely being saved, he's now head over heels for Claire, which gives Jared no more reason to be jelous, and adds one more capible player to the team. And, sick of being the victim, Nina starts taking self-defense classes from her family, so she fits into the equation just as well.

However, the book remains out of reach since Donovan, and thus his Hybrid guardian Isaac, son of Michael, are working on Shax's side and will protect it at all costs; which means to save Nina the group would actually have to kill a Hybrid, which in itself might already start a war. Complicated much? Amongst all the frustration, Nina finally loses her nerves and breaks Jared's resolve for just one night. The next day, Bex and Claire take Nina along for the assassin show, and they learn that Ryan was supposed to be captured and tortured about the family, so now he's officially on the target list. Thus, after some bitching, he is told the truth by Claire and therefor on the team now. Just in time so he could stay behind with Kim and Nina so all three of the Hybrids could make a move on Donovan, and with him is Hybrid Isaac.

When it turns out to be a status quo situation yet again, they have no other choice but to use Nina as bait, to distract the demonic horde long enough so the Hybrids can get to the book. So when Ryan and Nina go out for drink (all show, of course), they get taken by Donovan and Isaac, and are brought to Shax's residence. Just as planned, they are sat in the room with the safe which contains the book, that Nina knows from her dreams, and the Hybrids come to the rescue. However, now it's how to get back out alive with hords of demons on their asses. Ultimately, the Hybrids have to stay behind to hold them off while Nina and Ryan try to make it out. Hesitant to leave Claire, Ryan wastes precious time, thus some demons are on them soon and they get separated. Bex catches up with Nina, bringing her to St. Anne's where they wait for the others.

Upon there return, there's not much time to celebrate. There's no loophole in the prophecy for them to use, and Kim insists the book is brought back to Jerusalem so her family is freed of their duty and curse. Still undecided what to do next, the group is attacked right there in the curch, with Shax himself leading his hordes. As Isaac and Bex engage in a fight, Donovan aims at Ryan. Claire shields him, intendind to just catch the bullets, but they go through her and Ryan is severly wounded. As Jared loses his head, pointlessly shooting at Isaac, Donovan manages to press a gun right to his temple. In pure reflex, Nina takes her own gun and ends his life, thus also effectively ending Isaac's. Now Jared and Bex engage Shax while Claire tends to Ryan and Nina stays with Kim. Another fight they win.

Ryan is brought to the hospital, a close shot just like Nina's had been in the first book, but he made it as well. Now that the war is started, the group has only one chance: protect Nina until she has delivered the baby she is now carrying, because Heaven will protect it, once it is born. Deciding to move the book to Jerusalem once Ryan is recovered, it gives them a little time to tend to the important things in life. So it's off to an angel marriage at the start of the next installment.