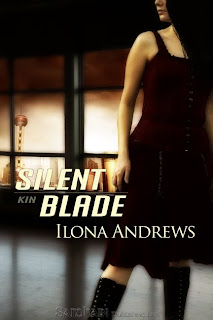 Goodreads Blurb: Old hatreds die hard. Old love dies harder.
On Meli Galdes' home planet, the struggle for power is a bloody, full-contact sport--in business and on the battlefield. For years her lethal skills have been a valuable asset in advancing her family's interests. She's more than earned her right to retire, but her kinsmen have one last favor to ask. Kill the man who ruined her life.
Celino Carvanna's razor-sharp business acumen--and skills with a blade--won him the freedom to do as he pleases. There's only one thing he can't seem to control--his reaction to the mysterious woman who tantalizes his senses. Her eyes alone set his blood simmering, stirring ridiculous adolescent fantasies about breasts and honey. With a few words she dissects his soul. Who is she? And how does she slide so easily under his well-guarded skin?
It's almost too easy to draw Celino within the kill zone. Meli plans to revel in him. Drink him in. Wring every drop of pleasure out of every moment. And when she's sure he belongs to her, she will finally repay a decade's worth of pain-in a single, brutal dose of reality.
Warning: Contains a heroine who excels in moving targets, a hero who can't get into her pants fast enough, and implant-enhanced sex (no, not that kind of implant...).

The story was rather short and without much of anything, but I think for it shortness it was quite good enough. However, the time and thoughts put into the world of the kinsmen would require far more, thus I am looking forward for more stories that hopefully will go deeper than the first. Well, even the first was good for it was so brief, although it was kinda predictable, I still liked the forms it took to get to where it ended. And, the ending was very, very nice! =)