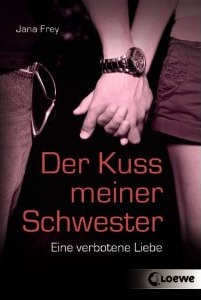 Blurb: Mattis is in love for the first time. Day and night, he only thinks of Mieke. And when she accidentially touches him, he shivers. There is nothing he wants more than to feel Mieke's body.
When Mattis secretly reads an entry in Mieke's diary one night, he discovers that she loves him, too. However, this love can never happen. Because Mattis and Mieke are twins.

Even though I don't like reading non-fictional works, I've read a book by Jana Frey years ago and was fascinated, so I thought I should try out another. However, it didn't turn out as well as I liked.
First, there was the first person narrator which I don't approve of because it makes me feel forced to take on the point of view given, but I'd like to make up my mind myself and chose camps the way I want to. There are a few books I've read in first person, and loved them, for example the Twilight Series by Stephanie Meyer. However, for this read it just irritated me.
Second, it took over half the book to build up the tension to the peak, which made it kinda boring. It would've been better to get to the point earlier and work out a proper ending instead. Yes, the ending was ... hanging in the air, basically. It was missing all the emotion that was so important beforehand. It might be a form of style, regarding it is first person, but even though the narrator's feelings may thin out at the end, this was just too much. Gave me an ooc feeling, and ruined for me all the parts I liked while reminding me that I had to have a lot of patience to get to the good part in the first place.
Third, it was just not aimed at my age group. Well, you could say it is all age just as much as it is young adult, since this is a very difficult topic that concerns all age groups, but the style is just not catching enough for me anymore. Yet, part of this problem arises probably due to my dislike of non-fiction.

Well, all in all it wasn't half bad, really. I would recommend it to teens, because the story in itself was good. It was just all the small things that added together for me, making the rating go down.