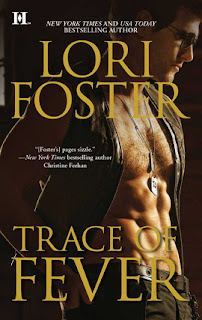 Series: Men Who Walk the Edge of Honor 2

Goodreads Blurb: Caught in the crossfire of vengeance and desire
Undercover mercenary Trace Rivers loves the adrenaline rush of a well-planned mission. First he'll earn the trust of corrupt businessman Murray Coburn, then gather the proof he needs to shut down the man's dirty smuggling operation. It's a perfect scheme - until Coburn's long-lost daughter saunters in with her own deadly plan for revenge.
With a smile like an angel and fire in her eyes, Priscilla Patterson isn't who she seems to be. But neither is the gorgeous bodyguard who ignites all her senses. Joining forces to plot Coburn's downfall, Priss and Trace must fight the undeniable heat between them. For one wrong move, one lingering embrace, will expose them to the wrath of a merciless opponent...

Yep, as expected, the title always has the name of one of them in it, this is awesome! The story is just as good as the first one, but I came to like Priss and Trace not as much as I like Dare and Molly. However, it's not just the same with different people, it's really a whole new story with new edges, new personalities - and new dangers, or course. I really, really enjoyed how Trace reacted to Priss, but was unable to make a move on her because of their covers. That's real torture, right there. ^.^ Then when Jackson had to get involved... Loved it, it was so funny, the situation and later Trace's jealousy. And it was totally awesome how Priss handled that, especially finding Trace in Helene's insane cluth... this was so omg crazy! But I also liked the ending, Priss with that gun in hand... She is a great woman who know exactly what she wants, I like that. However, I have to admit she annoyed me somewhat with her 'determination', it felt overboard so she came across a little.. stupid, really. Sorry.

Trace cursed. He actually wanted to hit something, but a tree would break his knuckles, he didn't want to put another dent in the truck, and Dare would hit back.
(pg. 134)