[Review] Lori Foster: When You Dare 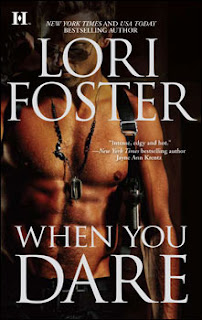 I found this series on Gone Pecan while snooping around a little. Thanks for sharing this, Dixie!

Series: Men Who Walk the Edge of Honor 1

Goodreads Blurb: The tougher they are, the harder they fall…
Professional mercenary Dare Macintosh lives by one hard and fast rule: business should never be personal. If a cause appeals to him and the price is right, he'll take the mission he's offered. But then the lovely Molly Alexander asks him to help her track down the men who'd had her kidnapped—and for the first time, Dare's tempted to combine work with pleasure.
Fiercely independent, Molly vows to trust no one until she's uncovered the truth. Could the enemy be her powerful, estranged father? The ex-fiancé who still holds a grudge? Or the not-so-shy fan of her bestselling novels? As the danger heats up around them, the only anchor Molly has is Dare himself. But what she feels for him just might be the most frightening thing of all…

Heck, yeah! This had just the right mixture of everyting in it: a guy to die for who's also an eye-candy alpha, a strong-willed woman, humor, bonding, real plot!, and a little bit of steamy smut. There was nothing too over the edge or stuff, it's actually so perfectly balanced, it seems a bit scary. However, since it had everything, it was just a little shallow, but really just a tiny bit where there could've been more time spent on certain parts. But it's not that it becomes unrealistic for that, because the feeling for time is a little off. I assume more time passed than what I thought it did, but there is nothing specific.
So overall, it's really, really good and I'm looking forward to the next one. Since this had Dare in the title, which also turned out to be the name of the protagonist, I am guessing the next installment is about his friend Trace. I'm excited to get to know more, and it's nice to know the stories are somehow connected, hopefully without depending on one another. =)