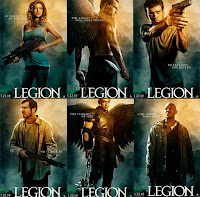 Summary: In the desert outside Los Angeles sits rundown Paradise Falls Diner. Abadoning his wings, this is were Archangel Micheal intends to defend the next messiah, the waitress Charlie's unborn child, against the legions of possessed humans. The only ones who can help him are the people present at the diner when all hell breaks loose: the Diner's owner Bob, his son Jeep who's in love with Charlie and wants her to keep the child, the one-handed cook and former soldier Percy, and the current guests consisting of a rich couple with a broken car and a rebellious teenage dauther, and single father Kyle.

A friend of mine is a huge Paul Bettany fan (which I didn't know, shame on me!), and while going through her DVDs, I discovered several movies I liked - which coincidencally all stared him. Does that make me Paul Bettany fan? I guess you can say that, because this guy is just yummy. ^.^

But, despite Paul Bettany which I didn't really know then, I did recognize the other main actors, and I like basically all of them. However, in this mix... it was good, but I think the story was just not for them. I think it would've been a lot more effective with a more prominent cast. It came across second rate despite the cast being good - in its seperate components, anyway -, and the plot not being half-bad, but the realization onto movie screen just wasn't the best. I can't put my finger on exact points that bugged me, basically a lot of little details, and the mood didn't quite strike as good as it could've been brought across from the actors to the audience.