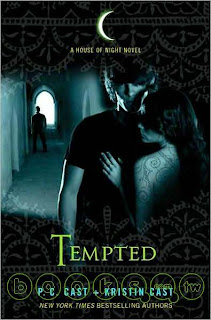 Blurb: Dark secrets and unspoken suspicions come between Zoey and Stevie Rae, putting their friendship--and the House of Night--at risk.
After Zoey Redbird and her gang have banished Kalona and Neferet, the fallen High Priestess from Tulsa, you'd think they'd catch a break. But with Zoey and her sexy Warrior Stark both recovering from a brush with death, a break is just not in the forecast. Zoey is haunted by her confusind yet elemental connection with A-ya, the ancient Cherokee maiden who was the only human able to tempt Kalona's body and soul. How will A-ya's pull on her affect Zoey's ability to resist the dangerously seductive immortal?
Meanwhile, Stevie Rae, with her super red vamp powers, always thought she could handle the stuff she's been keeping from her BFF. But the mysterious, threatening force lurking in the tunnels under Tulsa is spreading. Stevie Rae won't confide where she's been and what she's doing, and Zoey is beginning to wonder just how much she can trust the person she always thought would have her back.
Will their choices destroy them and will darkness consume the House of Night? Find out in this next spectacular installment in the bestselling House of Night series.

Omg, omg, OMG!!!! This book had the worst cliffhanger ending ever! I know the series continues on, but you can't just let a book and like this! It's just.. no! This installment is most definitvely the most emotional of the novels up to now, and I mean throughout the whole book. There was a lot going on on the love and trust level, and even though the problems seem to finally get firm frames, there was no getting close to figuring it all out. Especially with an ending like this that leaves you totally speechless and desperate in knowing how this can ever go on, how this can end alright. Besides the destructive force of the ending, I'd have never expected a lot of things that happened in this sequel, so I do think it's the best one of the House of Night novels up til now.