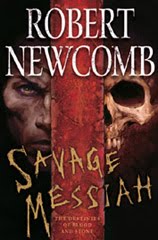 Blurb: With the demise of his evil half brother, Wulfgar, Prince Tristan restored peace to Eutracia ... or so he thought. For the Orb of Vigors is bleeding magical energy and cutting a swath of destruction across the kingdom. Even worse, Wulfgar is neither dead nor defeated - and he has grown even stronger in the dark arts. Now, with powerful demonic servants and weapons of dire potency, Wulfgar sets out to complete the destruction of the Orb - and to avenge himself on the Chosen Ones. Tristan and his trusted allies embark on a desperate quest to restore the prince's enchanted blood, the only remedy for the wounded Orb. If they should fail, the Orb will perish, and with it the Vigors. As for success, that may prove more costly still.

I like the story, the world and the fantastic creatures that Newcomb creates are just awesome, but this is the fourth book and the characters have not developed as much as they should have in my opinion. The plot is still intresting, a good sequel, but the drama and range of the events seem a bit forced, unbalanced. Yet, once you start it and get into it, it's a really good sequel. Like in the books before, Newcomb makes your heart wretch for the first 4/5ths of the book because you feel with the main characters and you just can't see how this could turn out more of a bruise than a lethal wound, and then he turns it all around on the last 100-or-so pages! Even though the main part of the book is only worth 3 of 5 points, the end always makes you want to know what happens in the next novel, so I just can't wait to start A March into Darkness.