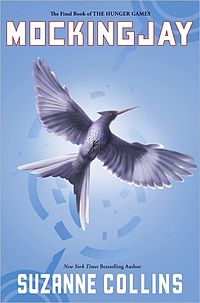 Goodreads Blurb: Katniss Everdeen, girl on fire, has survived, even though her home has been destroyed. Gale has escaped. Katniss's family is safe. Peeta has been captured by the Capitol. District 13 really does exist. There are rebels. There are new leaders. A revolution is unfolding.
It is by design that Katniss was rescued from the arena in the cruel and haunting Quarter Quell, and it is by design that she has long been part of the revolution without knowing it. District 13 has come out of the shadows and is plotting to overthrow the Capitol. Everyone, it seems, has had a hand in the carefully laid plains - except Katniss.
The success of the rebellion hinges on Katniss's willingness to be a pawn, to accept responsibility for countless lives, and to change the course of the future of Panem. To do this, she must put aside her feelings of anger and distrust. She must become the rebels' Mockingjay - no matter what the personal cost.

Where to start? It surely was a great read, just like the first two. However, while The Hunger Games and Catching Fire caught me in certain moments as much as I enjoyed them overall, Mockingjay was so fierce overall that there was no space for a few special moments. I missed that. Furthermore, I felt I was losing my connection to Katniss as much as she was losing herself, which was actually quite an accomplishment from the wirter's pov, but surely not that magnificent for the readers. Thus, I liked it that more characters besides Katniss came into focus more, although none for too long: Finnick, Annie, Boggs, Peeta and Gale. It helped not to totally disconnect with what was going on outside Katniss's more and more shattered mind.
The story in itself was an absolutely awesome ending for this trilogy. Suzanne Collins has built up an arc of suspense with the first two books that now beautifully came to blast in the last one. Of course there was the rebellion in itself, how Katniss finally comes to terms with her role as the Mockingjay, and tries her hardest for it, but also the small parts around it, like Finnick and Annie's wedding, or Peeta's rescue. Their first meeting, which I had several beautiful scenes for running through my head, totally shocked me; and then that game of "real or not real" tugged at my heart everytime it came up...
As for the ending: I was glad about the final choices Katniss made, but I would've totally let that epilogue be. It didn't really screw it, but it shifted the mood too much. The same damn thing like in the last Harry Potter installment. Duh. It would've been totally fine to let those last details be up to the readers' imagination, wouldn't it?

Gale finally says, "You're still angry."
"And you're still not sorry," I reply.
"I still stand by what I said. Do you want me to lie about it?" he asks.
"No, I want you to rethink it and come up with the right opinion," I tell him. But this just makes him laugh.

I try to think of a witty comeback, when Boggs says brusquely, "Well, don't expect us to be too impressed. We just saw Finnick Odair in his underwear."
I decided to go ahead and like Boggs.

I want to walk, but that's out, so I negotiate my way into a wheelchair. I feel fine, really. Except for my head, and my leg, and the soreness from the bruises, and the nausea that hit a couple minutes after I ate. Maybe the wheelchair's a good idea.

When the brains are selected, I'm not surprised to see Gale's name on the list. I thought Beetee would bring him, not for his technological expertise, but in the hopes that he could somehow think of a way to ensnare a mountain.