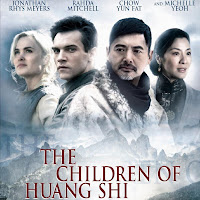 Summary: In 1937, China and Japan are struggling in a war that had never been declared, and therefor did not even take place to the political world. George Hogg is a British journalist and comes to Nanjing in order to report back to Europe that there is a war, so that the pressure form Europe might send the Japanese back onto their island. He is witness to mercyless cruelty for the first time in his pacifist life, takes pictures of the massacre taking place right in front of his eyes, and when he is captured by Japanese soldiers, those pictures seal his fate: execution, because he knows too much. He is rescued by Chen "Jack" Hansheng who leads several rebellion troops, and sabotages and fights the Japanese whenever possible. Chen introduces George to nurse Lee Parson who then sends the journalist to Huang Shi where she is taking care of the orphans as good as she can, but the situation is disastrous. After George admits that he is not fit to go back to the frontline, he abandons his journalist job and takes care of the orphanage instead. Soon, he becomes teacher and confidant to the children, and learns to love them in return. When the Japanese get closer in 1944, the Chinese army will be forced to confiscate the land, meaning the orpahange's food supply as well. Before that can happen, George lets his kids and Lee pack up everything they own, and they abandon Huang Shi. They march 700 miles in the coldest winter since 20 years ago, over a montain range 3000 m and higher, to reach Shandan at the outskirts of the desert Gobi.
My Review:

Well, while I like historical movies, I prefer to go back further when men still rode horses and wore heavy armor. But, this movie was awesome. It's not as heart-wrecking as it could be, but I liked it. Very realistic, I think, even though you do not get the impression that this stretches out over a period of 7 years, it feels more like 7 months really. Yet, aside from that, it has everything you'd expect of this kind of movie, nicely wrapped up. I'd recommend it to everyone, and I'll probably be watching it again.