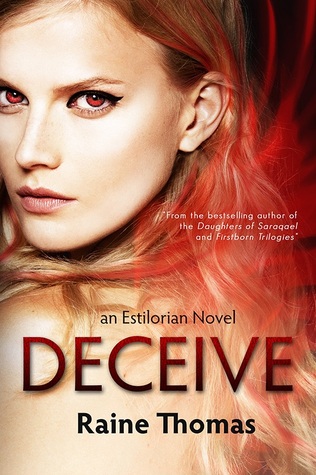 When the elders imprisoned Metis, they took every precaution to protect the Estilorian plane against her evil.
It wasn’t enough.
Now she’s escaped, and no one is safe. Fueled by hatred, she wastes no time imposing vengeance on those who captured her. She knows the surest way to destroy their lives is by taking what they love most, and she begins with a child named Eden.
Years later, Eden remembers none of her former life. She serves her “Master,” unaware of the family still searching for her. But as her eighteenth birthday approaches, memories begin to surface, and she questions her circumstances for the first time.
Eden’s confusion mounts when she’s joined by Connor, a handsome Elphresti male who reveals things that shatter her reality. They’ll end up on the run, knowing they can trust only each other. After all, Metis will stop at nothing to get them back, and she thrives on her ability to deceive.

Why I am waiting on this? I'm not up to date on the series at all, but Raine Thomas is one of my favorite authors, so I promote everything she writes. Her Estilorian world is pretty big and a little complicated with the names and colors/abilities, but that's just what makes it amazing fantasy!